This Mod will spawn a whole gang of homicidal clowns dressed as Ronald McDonald clones. They attack Peds, pull people from their cars and beat them up and they also chase and kill most Peds who fire guns - including cops. They are as tough as old boots and will gang up on people to fight them team-handed. After they kill someone they will 'talk to the dead', often en masse. They do other strange things too, like following people by walking right behind them for quite a distance before attacking them. Cops will be pulled from their vehicles if they try to drive away after firing a gun and the police won't fight back either! The Clowns are also impervious to bullets. Another odd thing about these maniacal clowns, depending on what area they are in, is they won't pull women Peds from their vehicles and generally do not fight women. They even pull the medics from their ambulance and beat them up including the guy in the rear! Again, depending on the area they spawn in, they will either ignore gang members or kill them. I'm not sure what the story is behind the Clowns, probably just more wacky Rockstar humor. Start a fight with the cops or take a bunch of them into a police station for mucho fun. Block traffic on a main highway then spawn the crazy Clowns and watch the ensuing chaos ;o) 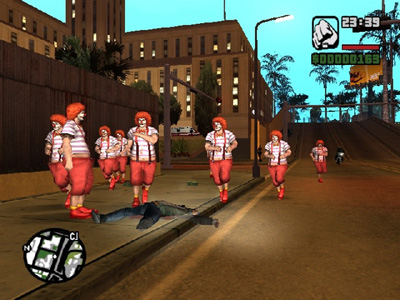